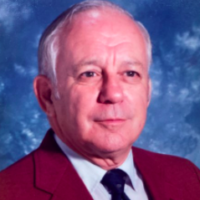 Edward “Eddie” Martin Levi, 95, of Ridgeway, VA, passed away on Wednesday, October 13, 2021, at his home. He was born on March 22, 1926, in Berryville, VA, to Marshal Gore Levi and Hilda Hart Levi.
Growing up in Berryville and Winchester, VA, Eddie attended John Handley High School, where he lettered in basketball, football, and track. Following his junior year of high school, he joined the U.S. Army Air Corps during World War II and was trained to be a belly turret gunner. While stationed in Alaska, he played baseball for two years and was on the All-Star Service baseball team. Following his years in the Air Corps, Eddie returned to John Handley High School and graduated in 1948. After graduating from Lynchburg College in 1952, he joined the faculty at Drewry Mason High School and moved to Ridgeway, VA, to teach and coach baseball and basketball. After receiving his master’s degree from University of Virginia, Eddie served as principal at Fieldale Elementary School until retiring in 1988. Upon retiring, he drove a bus for Carlisle School for several years. He was an active member of Horsepasture Christian Church for many years, serving as deacon for some of those years. In addition to his parents, he was preceded in death by two brothers, Marshal “Pen” Hart Levi and Rodney Simmons Levi; a sister, Patsy Levi Pulliam; and a granddaughter, Levi Faith Foster. He is survived by his wife, Virginia White Levi; two daughters, Beth Levi Nance (Don) and Kerri Levi Foster; one granddaughter, Lauren Nance Willis (Zach); one grandson, Drew Levi Foster; two brothers-in-law; three sisters-in-law; and many nieces and nephews. The family will receive visitors at McKee-Stone in Martinsville on Friday, October 15, from 6PM until 8PM. A funeral service will be held at Horsepasture Christian Church on Saturday, October 16, at 1:00 PM. Burial will follow in the church cemetery. Minister Tim Hunt and Pastor Jimmy Nickelston will officiate. Memorial contributions may be made to Horsepasture Christian Church Missions Fund, or to a charity of the donor’s choice.