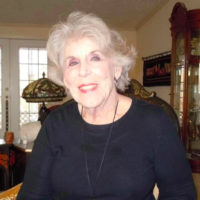 Ann Brockenbrough Atway passed away on August 5, 2022, at her home in Dublin, Va. after a brief illness.

Ann Bowyer Brockenbrough was born in Lynchburg, Va. on January 25, 1930. Her father and mother were early aviators, and she, along with her five siblings, grew up beside their parent’s airport in Mecklenburg County, N.C. The family sold Piper cub airplanes and gave flying lessons.

Ann and her siblings learned to fly at an early age and they all became immersed in the family aviation business.

Ann was an avid reader, which may have also led to her adventuresome spirit. After graduation from high school, Ann married, after a brief courtship, Mahmud “Mike” Atway, a Palestinian immigrant to the United States. Mike had served in the US military during World War II and had recently been discharged after the war when they met. Mike and Ann spent much of their marriage traveling and living both in the United States as well as Palestine, raising and educating their children. Ann spoke fluent Arabic and totally absorbed herself in the Arabic culture and society. She was always ready to travel and explore new places.

Ann had a long career in nursing. She worked at Radford Community Hospital and Montgomery Regional Hospital in the New River Valley, where she lived for many years. She also lived and worked in Charlotte, N.C. practicing nursing in major medical facilities in the areas of trauma and cardiac care. For several years Ann worked as a nurse for a British company in Saudi Arabia where she assisted in setting up a cardiac care hospital for the Saudi government. After a long rewarding career, she returned to Pulaski County, Virginia to live and then retire, in order to be closer to her family.

Ann was a long time member of New Dublin Presbyterian Church, where she enjoyed singing in the choir, and participating in the life of the church. She served in leadership roles in her church and particularly loved mission work, both on the local and national level as well as international missions. She loved the time she spent in medical missions serving in Haiti, Mexico, and various Latin American countries.

She is survived by sisters Jane (Bobby) Riggins, and Jo (Donnie) Boykin; sons Fouad "Mike" Atway, and Jamil "Jim" Atway; and daughter Miriam "Mia" Copeland. She is also survived by her grandchildren and great grandchildren, with whom she had a strong, impactful, and inspiring influence. She is survived by a number of nieces and nephews who all regarded her as the strong matriarch of the family. She was a woman of great faith and at the end of her life expressed to her children and grandchildren that she was ready for her “next adventure” and wanted to “see what lies beyond the stars”. She will be greatly missed.

Ann is also survived by a great many friends that she made throughout her life. Her family wishes to thank New Dublin Presbyterian Church, and all those people that reached out to the family during this time.

The family asks for any memorial contributions to go to New Dublin Presbyterian Church, Dublin, VA.

The Brockenbrough Atway family is in the care of Mullins Funeral Home & Crematory in Radford, Virginia. www.mullinsfuneralhome.com