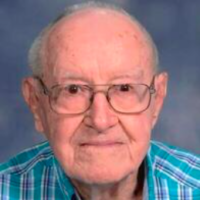 Richard S. Flora, 99, died unexpectedly August 4, 2022 at Rocky Mount Rehabilitation Center. He was born March 19, 1923 in Franklin County, Virginia. He was the second oldest in a family of six, born into a farming family composed of his parents: Charley Ben Flora and Mae Plunkett-Flora and six siblings; sisters, Rachael (deceased), Helen, Jean (deceased), brothers; David (deceased) and the oldest son who died early in life.
Richard started working for his father on their dairy farm and used his father's equipment when hired out by local farmers for disc and plowing services.  He married his wife Virginia Ann in 1940’s. During WWII, war demands put him in job options not favorable to family life; as a declared person on the farm, Richard left the family home and his young wife Virginia Ann Peters – Flora and newborn child (June) to travel weekly to Norfolk, VA. There he learned iron welding to be used for building the interiors of naval ships.  He traveled long hours every weekend carrying several friends and local coworkers with him.
Richard’s love and engagement with his cherished wife “Ginny” and with both their families’ support; Richard worked a 100-acre farm and at the same time expanded his opportunities for providing for his family.  These included: growing the business into a heavy equipment business for hire/contract for all types of earth moving jobs, such as road works and land grading but most notably his pond construction across Franklin County and surrounding areas.  In this work, he got to know many members of Franklin and surrounding counties from many sectors – government, residents, and business. Richard also supplemented his main business with raising and tending beef cattle, he retired from bulldozing at 72 and retired from cattle farming at 87.
During those early years, Richard and Virginia Ann had three children, June, Carol, and Stuart. All of whom, with the support of their Dad and Mother were able to achieve advanced college degrees in engineering, agriculture, and education. All inspired by Richard and Ginny’s emphasis on education. He and Ginny were lifelong members of the Antioch Church of the Brethren and a devoted Christian man.
In Richard’s later years – he was devoted to the care of his wife – she was ill and disabled for many years. In his late 80’s, he was able to find someone to share his life with again – they went on walks every day, played games, and shared daily events. He remained active at mowing and maintaining his farm well into his late 90’s, enjoying bird watching, and using his binoculars to observe the cows.
Work is not sufficient to talk about Richard; As he was a gentle, kind, helpful, and generous man. He is remembered by his grandchildren and great grandchildren as a granddad who played games, told stories, drove tractors and more. Even at an advanced age would always participate in snow sledding. Richard lived a long life filled with the celebrations, disappointments and adaptations all of which may up a fulfilled life. He will be dearly missed.
Richard is survived by his sister Helen Saul of Rocky Mount; his son, Stuart Flora and his wife, Elizabeth Flora; his daughters Carol Flora and June Flora and her husband George Lindsay; his six grandchildren April Flora, Blair Grizzard and her husband Will Grizzard, Savannah Lindsey, and Zach Lindsey; two great grandchildren Evie Grizzard and Ember Jones; as well as many nieces, nephews, and extended family.
A service celebrating his life will be conducted from Antioch Church of the Brethren with visitation at 10:00 am and service at 11:00 a.m. Monday, August 8, 2022 officiated by Pastor Andy Duffy. Interment will follow in the church cemetery. The family invites your consideration of a gift to the Franklin County Rescue Squads who served the family during Richard's wife's illnesses and to the Antioch Church of the Brethren. The family expresses their sincere appreciation and gratitude to the many friends and neighbors who have known and cared for Richard and his wife throughout life. Arrangements by Flora Funeral Service and Cremation Center, Rocky Mount.