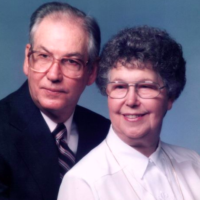 Evelyn Loranie Harrell Keffer, 94 of Pearisburg, VA went to be with the Lord on August 5, 2022. Evelyn was born on August 19, 1927, in Pulaski Co, VA and was a daughter of the late Charles Rufus Harrell and Mary Elizabeth Riddle Harrell. Besides her parents, she was preceded by one son, Eric Keith Keffer, 4 brothers and 3 sisters. She is survived by her husband of 69 years, Lane Keffer, her daughter, Sherry Keffer Saville of Pearisburg, 2 grandsons, Kelley Keffer (LeeAnn) of Pearisburg, Shane Saville (Lauren) of Salem, 1 brother, Roger Harrell (Susan) of Dublin, and 2 great grandsons, Skyler and Hunter Keffer. Funeral services will be held Tuesday, August 9, 2022, at 2pm at the Givens Funeral Chapel in Pearisburg with the Rev. Joel Sauceda officiating with burial following in the Birchlawn Burial Park in Pearisburg. The family will receive friends Tuesday hour before the service from 1 â€“ 2pm. Memorial donations may be made to the First Christian Church in Pearisburg. Online condolences can be sent to the family at givensfuneralhome.com.