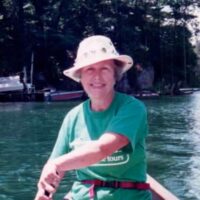 It is with great sadness that we share the news of the death of Elizabeth Ann Agnew Ritchey, of Blacksburg, who passed away on November 21, after suffering a stroke from which she was unable to recover. Liz was born on May 13, 1935, and was blessed with an eventful life, full of family, friends, travel, teaching, and outdoor adventure.

Liz grew up in Toronto, Canada, the only child of Robert and Marjorie Agnew, and graduated from Bloor Collegiate Institute in 1953. She was planning to pursue a degree in entomology if a guidance counselor hadn’t told her this was not an appropriate major for women. Instead, she earned her bachelor’s degree in health and physical education from the University of Toronto, where she made life-long friends, including her “twin,” Dorothy. With the spirit of adventure that informed her life, Liz left home and pursued a master’s degree at the University of Illinois, Champaign-Urbana, where she met Sanford Jewell Ritchey, a fellow graduate student far from his home in Louisiana. Upon graduation, they married in September 1957 and embarked on a 65-year journey together that included a six-year stay at Texas A&M and then a move in 1963 to Blacksburg, Virginia, where they raised three children.

Liz taught on the faculty at both Radford University and Virginia Tech, earning her PhD in health and physical education, while also managing to be involved in many kid activities, including as Cub Scout leader, Band Booster president at Blacksburg High School, and attendee at school and sporting events. She also was involved in many community groups, including the Faculty Women’s Club, AAUW, and a weekly hiking group. She was a sister of and then later served in many advisory roles with the Tri Delta sorority and is considered the founder of the Beta Nu chapter at Virginia Tech in 1973. Closest to her heart was the Whitewater Women’s Canoe Club that she started after retiring from teaching. Every Wednesday in the fall and spring, Liz, known as “the boss,” and the group that now includes 50+ current and past members, explored the rivers and lakes of southwest Virginia. A highlight for this family of river sisters was the annual canoe trip in February to a warmer climate.

Liz and Jewell also spent many memorable hours cheering for the Hokie football and basketball teams and enjoying concerts and programs at the Moss Arts Center. Although she enjoyed traveling to many places around the world, her favorite destination was her family’s cottage on Lake Couchiching in Washago, Ontario, where she and (now counting six generations) of her family spent every summer. Here she re-connected with her Canadian friends and family, including cousins Joan and Susan and their families.

Liz was happiest being outside and on the water and passed down her passions to her family, including children Kenneth and wife Tracy, Eric and wife Pam, and Julia and husband Chris; and grandchildren Taylor & Jordan Ritchey and Samantha & William Marin. Inspiring everyone with her leadership, teaching, and encouragement, Liz will be remembered most fondly by her many friends and family when biking on a country road, hiking on a mountain trail, or paddling on a white-water river.

If wishing to donate to a local charity in Liz’s name, suggestions would be Friends of the Huckleberry and the New River Land Trust. The family is planning a Celebration of Life for early January.