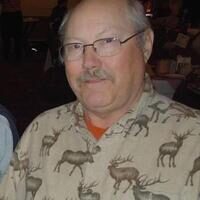 It is with a heavy heart that the family of James Peery Goodwin announces the passing of our dear husband, father, brother and grandfather on January 23, 2023. Affectionately known as Pop-Pop to his grandchildren, Jim lived a full life enjoying his family, friends, church, his workshop and all things related to sports.

Born July 14, 1945, in Burkes Garden, Virginia, Jim was preceded in death by his parents, Thomas Peery and Nora Ellen Goodwin, as well as his brothers David, Joseph, and Jackson.  Married to Brenda Goodwin for nearly 48 years before her death in 2012, Jim was employed by Babcock & Wilcox on Mt. Athos Road for 45 years as a computer technician, using his associates degree from the Chicago Institute of Technology.

Jim was a true Renaissance man, capable of building, wiring, or painting anything from bookshelves and French doors to coffee tables and model airplanes. He had a kind heart and was a true neighbor to anyone who needed help. He was a tough but loving father, teaching his children the importance of fishing (mountain trout) and why Vince Lombardi was the greatest football coach of all time. He was a member of the Concord Volunteer Fire Department for many years, volunteered at Centra Hospital and remained a member and Deacon of Calvary Baptist Church.  One of his greatest loves was officiating.  Jim was a referee and umpire for more years than anyone can remember. His passion was so great his children grew up believing that the person to root for at baseball games was the umpire. So, turning in his “zebra stripes” due to his health was probably one of the saddest days of his life.

However, fortune found Jim when he met Marjorie Vaughan. On February 14, 2017, the two eloped, surprising their family and themselves. Marjorie remained a faithful companion to Jim until his last breath, nursing him for the last several weeks of his month through Hospice care.

In addition to Marjorie, Jim is survived by his children, Beth (and Kent) Colling of Charlotte, NC and Jeff Goodwin (and Nick Settle) of Rock Hill, SC; his stepdaughter, Tiffany Philpott of South Boston, VA and stepson, Jefferson Moore of Concord, VA. His surviving grandchildren include Mackenzie Frackleton of Boston, MA; Courtney Rae of Colorado Springs, CO; Jackson Colling of Raleigh, NC; Lilli Goodwin of Lynchburg, VA; and Dani Colling of Charlotte, NC; and his step-grandchildren, Brittany Smith of Brookneal, VA, Christopher Greene of South Boston, VA, and Andrew Greene of South Boston, VA. He is also survived by his siblings, Thomas (Jan) Goodwin of Columbus, Ohio; Louisa Mason of Northern Virginia; sisters-in-law Shirley Goodwin of Prince George, VA and Sue Goodwin of Princeton, WVA.  Jim is also survived by his life-long best friends, Ray and Carolyn Smith of Concord, VA, to whom the family is forever thankful.

Visitation will be held on Thursday, January 26, 2023, from 1 to 2pm at Calvary Baptist Church in Concord, VA.  The funeral service will be held at 2pm in the church followed by burial in the church cemetery. The family invites anyone who attends the service to stay for a meal in the fellowship hall.

In lieu of flowers, donations can be made to the American Heart Association.