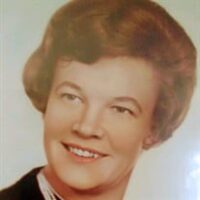 Mabel Mills Sheffield, 90, passed away Tuesday, September 20,2022. She was born January 21, 1932 to the late John William Mills and Minnie Miles Mills. In addition to her parents, she was preceded in death by her husband, L. H. Sheffield; brothers, Harvey and Marvin “Buddy” Mills; and sisters, Frances Hunt, Grace Mills, Margaret Mayer and Hazel Pulliam. She is survived by her nephew, Wayland Pulliam who was her long time caregiver; niece Marylynn Brown; Courtney Brown whom she considered a grandson; and many nieces and nephews. Mabel had been employed by DuPont until her retirement. While there she was noted for her basketball skills demonstrated on the Martinsville DuPont basketball team. A graveside service will be held on Sunday, September 25, 2022, at 3:30 PM at Overlook Cemetery in Eden, North Carolina. In lieu of flowers, donations may be made to the Ridgeway District Volunteer Rescue Squad, P. O. Box 611, Ridgeway, Virginia 24148. Wright Funeral Service & Crematory is serving the family. Online condolences may be made at www.wrightfuneralservices.net